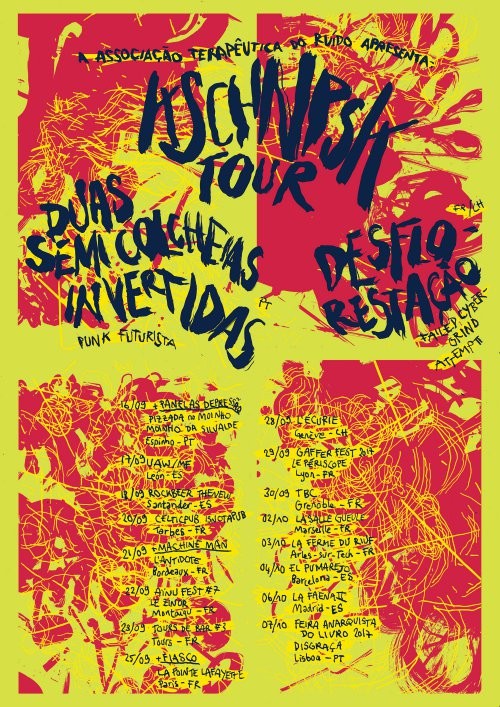 The infamous dUAS sEMIcOLCHEIAS iNVERTIDAS get together with the ignoble Desflorestação and get back on the road for the KsChNpSk Tour, a tour that will take them to Portugal, Spain, France and Switzerland from the 16th September till the 7th October!

Formed in 2007 by the same sick minds who created the hyperactive Associação Terapêutica do Ruído (ATR), their siamese entity which is dedicated to promoting DIY concerts and releasing and distributing records, the dUASsEMIcOLCHEIASiNVERTIDAS (dSCi) are a collective of noise therapists based in Lisbon that have a curriculum almost as extensive and intense as their music: two EPs (“I” in 2008 and “II” in 2009), a tape (“SADITREVNiSAIEHCLOcIMEsSAUd“ in 2010), a LP (“4” in 2012), two split-tapes (“dSCi/Cangarra” in 2013 and “Chains Split Tape Vol. 2” in 2016), two live albums with their side project of electro-acoustic improvisation dOISsEMIcIRCUITOSiNVERTIDOS, participations in several compilations, countless european tours and hundreds of concerts in the most varied situations and places and with the most diverse groups and musicians, not to mention all the other projects to which they are or have been directly and indirectly linked during these 10 years.

Desflorestação vomits flowers and trees in a post industrial cybergrind blitzkrieg. Intense, noise and fat, it delivers a deluge of blasting kicks and lightning strikes. Our livesets are LOUD and short.
Desflorestação was formed in 2015 by Dodo Cabelo from geneva (brasil) distorded vocal folds, and krodelabestiole from paris (brasil) deviant electronics, smoke machine, strobe.